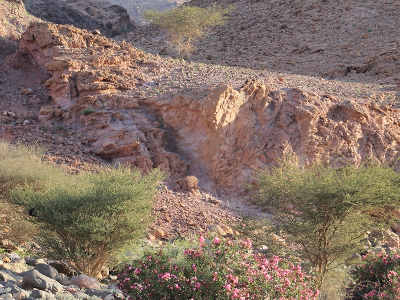 Lower Wadi Dana near Feinan. Picture: Fares Khoury (JBW); CC BY 4.0The DGUF along with DAI and DBM support the protest against the planned copper mining in the Dana Biosphere Reserve, which is the biggest Jordanian nature reserve and protected by the UNESCO. DGUF, DAI and DBM also support the following: the rejection of copper mining by the Royal Society for the Conservation of Nature (RSCN), the statement by Jordan Bird Watch (JBW), the international call for protection by ICOMOS Jordan, and the letter of a group of Jordanian and international archaeologists who work in the Dana / Feynan area, sent to the Minister of Tourism and Antiquities on 31.8.2021.

Copper mining in Dana Biosphere Reserve grossly violates the Jordanian national laws, which strictly protect natural reserves and national parks (see: The Legislation of the Hashemite Kingdom of Jordan, "Regulations No. (29) of 2005", dated 22.2.2005; esp. Article 9). The Dana Biosphere Reserve includes Wadi Feynan, which is internationally well known for its Early Neolithic sites and for its intensive copper mining during the Iron Age and the Roman period.

We, who support the objections, are the following: (a) The German Archaeological Institute (DAI, Deutsches Archäologisches Institut), which is the most important governmental institution for international and national archaeology in Germany. (b) The German Mining Museum Bochum (DBM, Deutsches Bergbau-Museum), which is a German research institute and which alongside with the DAI has been carrying out and is still carrying out many archaeological research projects in Jordan and in the Dana region. (c) The German Society for Prehistory and Early History (DGUF, Deutsche Gesellschaft für Ur- und Frühgeschichte), the German NGO for archaeology. Together we have sent a letter of concern to the Jordanian Prime Minister and to the responsible Jordanian ministries, in order to support the national and international protests against the planned copper mining in the protected natural reserve.

In Jordan, the mining company "Manaseer Group" is currently seeking an exploration or mining concession mainly for copper ore in a 60 - 80 square kilometre area in south-central Jordan. A precise specification of the area applied for is not known to the public, e.g. maps including demarcations have not been publicised yet. Instead, the area is defined as follows: "in/on the Dana Biosphere Reserve, on its western side near Wadi Araba, including Wadi Feynan, Lower Wadi Dana, Wadi Khaled as well as Khirbet el Nhas". The Dana Biosphere Reserve, which was established in 1989 and which is now covering 308 square kilometres, underlies the Jordanian national protection and conservation of nature law, and at the same time has been a UNESCO Biosphere Reserve since 1993.

So far, the intention of copper mining has gained little international attention, and national reporting in Jordan is cautious and restrained. Key political players are apparently impressed by the economic possibilities of the mining project. The government recently signed a memorandum of understanding with a big Jordanian mining company to allow exploration, hoping for an investment of €240 million and anticipating 1,000 direct jobs plus 2,500 additional indirect jobs.

View from Dana village over the reserve area that extends to Wadi Araba. Picture: Fares Khoury (JBW); CC BY 4.0.The Dana Biosphere Reserve and Wadi Feynan

The management of the reserve, which is much visited by eco-tourists, is supervised by the Royal Society for the Conservation of Nature (RSCN), which opposed the mining project in an unusually sternly worded statement on August 23rd and which complains about not being involved in any recent negotiations concerning changes of the boundaries of the Dana nature reserve. Jordan Bird Watch (JBW), a Jordanian nature conservation organisation, published a statement on the 19th of August, objecting the mining plans. Also ICOMOS Jordan published its statement then. So far, archaeologists and monument conservationists are barely on the agenda, although Wadi Araba and especially Wadi Feynan are famous for their archaeological sites. For example, the German Mining Museum in Bochum (esp. G. Weisgerber, A. Hauptmann) has carried out extensive studies within this area on early copper mining since the 1980s; its initial focus was on the "Iron Age II" (ca. 900-500 BC) and next on the Roman period. However, Wadi Feynan is also known for its Early Neolithic sites, e.g. the sites investigated by the British archaeologist Bill Finlayson.

Protests against the planned copper mining

The Jordanian conservationists certainly welcome international attention and support, also from the archaeological community. Even people, who may be less concerned about cultural heritage, are expressing their grave concerns about mining-related environmental damage and contamination of the groundwater. Unfortunately, the Jordanian opposition against copper mining in Dana is not organised well: No consitent hashtag has yet been established for the topic on Twitter. Nevertheless, #saveDana (use this!), #save_Dana, and #DanaReserve are being used quite a lot. Furthermore, two different petitions have been launched at Change.org, both with similar aims. The link given below shows the petition with the most signatures up to now. Currently, the DGUF, the German Archaeological Institute (DAI) and the German Mining Museum Bochum are jointly preparing a statement for the attention of the official body in Jordan, aiming to support the statements of RSCN, JBW and ICOMOS Jordan against the mining activities.

Statements and letters of concern, petition